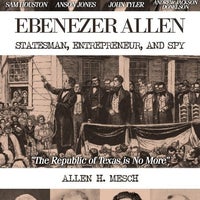 Ebenezer Allen - Statesman, Entrepreneur, and Spy is the long-overdue biography of Texas attorney Ebenezer Allen. The new biography explains his forgotten, but important contributions to the history of the Republic and the State of Texas. Allen was attorney general and secretary of state during the annexation of Texas by the United States, the state’s first elected attorney general, and obtained the charter for one of Texas’ early railroads. Mr. Allen was born in Newport, New Hampshire on April 8, 1804, and graduated from Dartmouth College in 1826. Allen moved to the Republic of Texas and became involved with the nation's politics. He served as attorney general and secretary of state for Anson Jones and helped coordinate the republic's annexation by the United States. After statehood, Allen became the state's first elected attorney general. He obtained a charter for a rail line from the Gulf Coast to the Red River. During the Civil War, Allen served in the Confederate Torpedo Bureau.